To dream about following in the footsteps of an anonymous Japanese photographer who printed an album of his local photos in the 19th century and to retake them with a camera of the same period, with a similar lens and using 19th century collodion photography techniques to make the print is what dreams (my dreams) are made of – but by toying with this idea, from an old album I found in a junk shop, I am discovering some interesting (for me) stuff.

Here are a couple of photos, the hand coloured one is from my album and I just took a quick snap to copy it. The other is from a collection in the Harvard library, it is by (probably) the most famous photographer of that time and place, Felice Beato. 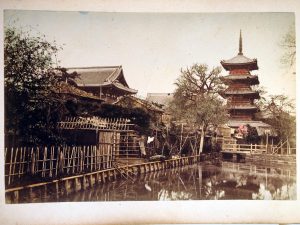 Two more are shown below… 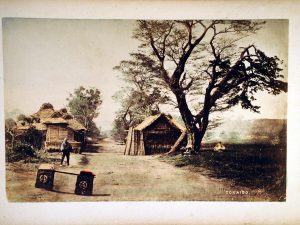 They are not both taken at exactly the same time, but they seem to be within a few weeks of each other, this dates them, according to Harvard, at around 1867 and the Beato photos used a longer lens, but from a quick look it seems the images from my album are older and more of the 25 original prints that I have are of the same subjects from the same place and the same period.

Good photographers will often find a very similar setting for a landscape – I have collodion prints from the 1860s of Mirror Lake, that Ansel Adams would have seen and he took exactly the same image from exactly the same place nearly 80 years later (some trees are taller in Adams photos of course).